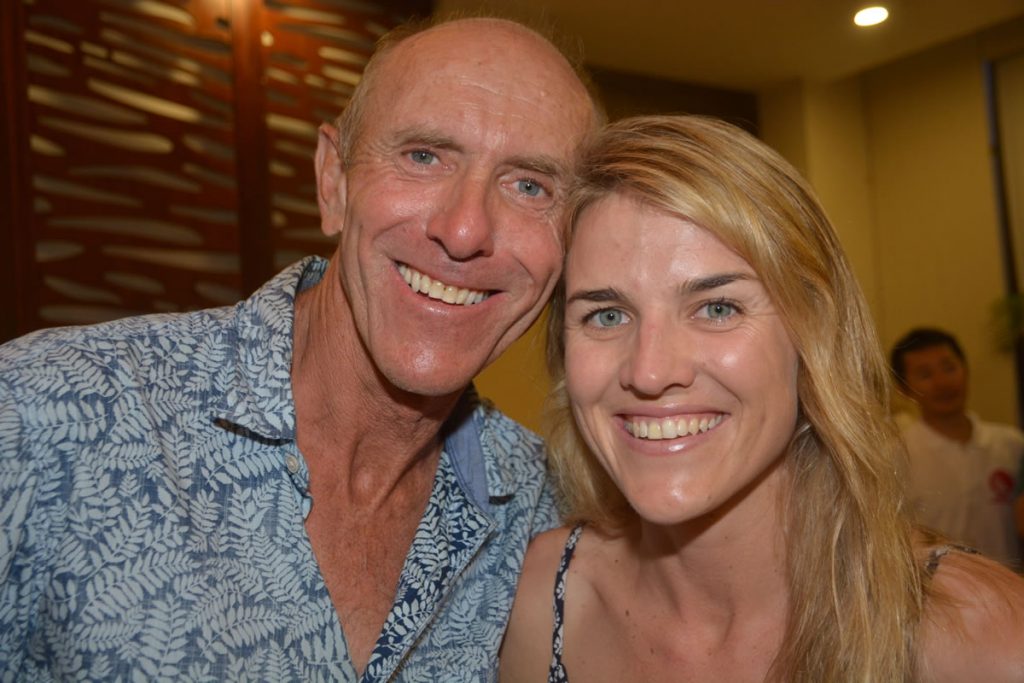 The final day, of the 2016 Hobie® 16 World Championship Open Semi-Finals was completed yesterday in Dapeng, China. With a total of 8 races on the board, each team rotated over the three day, semi final series and contested 4 races apiece.

Last night at the Manwan Harmona Resort Ballroom the Finals Cut Party was held and the 44 teams going through to the finals were announced to cheers and loud applause.

Rod Waterhouse from Australia goes into the final series in the lead, this time sailing with his daughter Bridget, after clocking up two series wins so far in this regatta, the Masters and the Grand Masters, with his wife Kerry as crew.

After the announcement that he was leading the field of international Hobie sailors Rod offered these comments.

“We’re really chuffed leading into the final series we’re not quite sure how we got there, we started a bit up and down. We had a 3 and a 2 to start with, which felt ok, and then we came down with a 20th which put us right back on our heels. That led to a lot of questioning last night.

So today we went out still reeling from yesterday’s 20th place and we got a 1 and a 2, which was absolutely brilliant. We had a little bit of luck in the first race when we got the second but the last race we felt we sailed brilliantly. With my daughter Bridget it was just a fabulous way to close out this semi final series.

Honestly, there are ten boats that are in contention and with the points to win this series. We’re only a third of the way through with up to 8 races to go. It’s going to take skill and luck, but we’re definitely in there, but it’s got to all go our way. We’re just happy to be leading at this point.

It’s a high level fleet and the wind is all over the place, the conditions are hard to read and basically there’s no predictability in it. Bridget and I have always wanted to do a major series and this is our chance. She’s a brilliant crew, she’s fast, she’s fun and she keeps me calm, which is great when you’ve got conditions like we’ve been having. So I’m really very, very fortunate having the opportunity to sail with her”.

The six foot, plus Dane Daniel Bjornholt and crew Josephine Frederiksen are sitting in a comfortable second place. Daniel shared some of his thoughts regarding the situation he now finds himself in.

“Coming into the series I was expecting to get into the finals and I knew that if we did we would do really well. I knew that if everything went right I’d be up there at the top because the speed is there and I’ve been making the right decisions.

Sure sometimes you have to be a little lucky and when others make a mistake it helps you to catch up. Here is Dapeng the others have made enough mistakes for me to catch up. It’s always about making less, mistakes than the others.

It seems like the top six are really close and the winner could be any one of those guys. It’s really about the weather and what happens on the day, it could be any of them.

The winds have been pretty light to medium and we really like strong winds, so I hope they pick up. I’ve beaten most of these guys in strong winds before and I think I can do it again”.

Rob and Haylie Andrews from Queensland in Australia are holding onto third position after winning through the qualifiers to make the semis. Rob had the following to say after his third place position was announced at the cut party.

“I was hoping to do well but I’ve done better so far than I thought I would. It’s been a great boost in confidence and I feel more confident now than at the start of the regatta.

But the best part of the regatta for me, I have got to say, has been sailing with my daughter Haylie. It’s just been the best experience for me spending time on the boat with my 16yr old daughter who I haven’t sailed with since she was 11, until we got here. I was a bit anxious about that, but her input has been invaluable. I knew she was a good sailor but I had no idea just how good she is. It’s made a massive difference and it’s let me concentrate on a lot of other stuff outside of the boat.

There are 10 or 12 guys that could win this, it’s really, really close sailing. If you make a tiny mistake you get spat out the back, it’s very close sailing.

I like a bit of breeze and I think it would be really good for the regatta, because that will sort out the people that can do both. I think a worthy world champion should be able to sail in light, medium and heavy weather”.

The Finals Begin Today and The Pressures On!