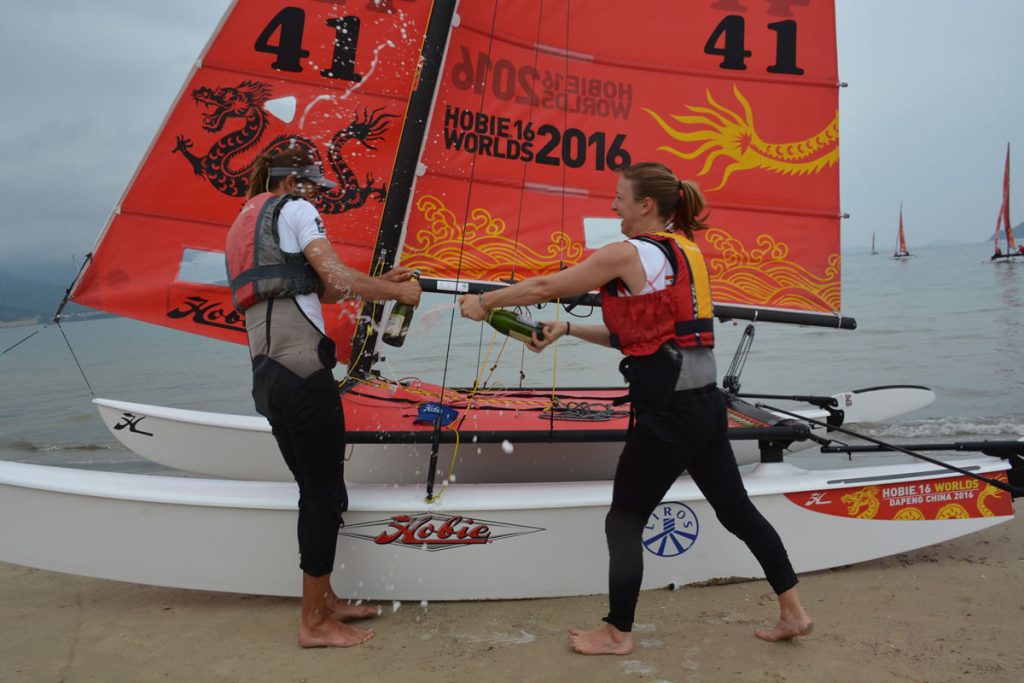 The final battle between the world’s best Hobie Cat® sailors was fought out on Dapeng Bay in China yesterday, in the final two races of the 21st Hobie® 16 World Championships.

Going in to the day’s racing Daniel Bjornholt Christensen (DEN) had an 8 point buffer and was holding onto an amazing 5 point drop, which meant that Mick Butler (AUS) needed a minimum of two races, and luck to go his way in both, to have a chance to move ahead of the Dane.

After an ominous start to the day with very light winds, optimism was still in the mind of all of the competitors. Even Bjornholt Christensen wanted to race if conditions were fair. Despite the chance that he could lose the crown that was looking like his for the keeping. Early in the morning not long after arriving at the event site he said.

“I’m happy to race if the conditions are proper. But right now it would be a chance game so I would prefer not to go out because I’m the one who could lose the most. But if the wind swings around and we get even any sort of a steady breeze, I’m happy to go out there and race”.

His crew 24 year old Josephine Frederiksen who has sailed with Bjornholt Christensen in two European championships was trying to remain as relaxed as possible while waiting to see if the Race Officer would call for the world championship teams to leave the beach.

“I’m just trying to take every minute as it comes, I’m trying not to think about it and staying as calm as I can be. If racing happens we’ll just have to go out there and do our best”.

At 10:30am the call came out that the bay had filled in with enough breeze for a start and with more wind coming in behind it. The race to the top of the world was on once again.

When race one started, a moderate 12kt breeze blew and sailing was intense with strong finishes crucial for the top six who where chasing the minor places in the series. Butler (AUS) was primed for a win or at least to place well ahead of Bjornholt Christensen. Unfortunately, he was well back in the field at the start and his task became more and more impossible as the race progressed. With Butler, now out of contention, the championship would go to the Bjornholt.

On the last leg of the race, the heavens opened, rain poured down and thunder rumbled around the bay as France crossed the finish line in the top three places with Orion Martin winning in the sheeting rain and howling 25kt wind.

After the storm had settled the bay was almost glass and racing was once again put on hold. Late in the afternoon another race was called and while Bjornholt Christensen and Frederiksen had the world championship in their keeping, second and third places were up for grabs. Fletcher Warren-Myers (AUS) sat on 34 points, Butler had 35 points, Orion Martin was on 36 and Benjamin Brown (USA) was also in contention with 39.

In a fair 12kts the race started cleanly with Martin blitzing the start at the pin end and setting himself up with a great opportunity to take a series podium finish. Warren-Myers was sailing confidently in a competitive position but Butler and Brown had dropped away.

Martin kept making the right choices and rounded every mark on the course with a strong lead. It was the third race victory in a row for the impressive Frenchman, who finished the regatta brilliantly to take out second place in the world championship along with his crew Nadine Wieland. After a consistent performance throughout the finals series, third place went to an excited Australian husband and wife team Fletcher and Georgia Warren-Myers.

Congratulations to all of the sailors who have fought out some awesome battles on these same oriental waters where pirates invaded the local population hundreds of years ago. We have discovered an amazing part of the world, seen intense, exciting and skilful sailing, witnessed great sportsmanship, made new friends and had fun times.

Daniel Bjornholt Christensen and Josephine Frederiksen you are the 2016 Hobie 16 World Champions! … and you’re just Brilliant!